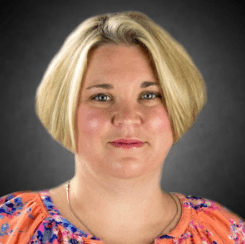 Mrs. Soose began teaching seventh-grade mathematics and serving as the Assistant Director for the Aristokats in August 2006.  In August 2008, she became the Director for the Aristokats.  After four years in seventh grade, she moved up to teach eighth-grade math and Algebra  I.  During her ten years of teaching math, she served as a department head, CEIC member,  and DEIC secretary.  In 2016, she received the honor of being recognized by her peers as the Teacher of the Year for Lynn Lucas and then Secondary Teacher of the Year for the district.

In August 2016, she began serving as the Technology Innovation Coach for Brabham and Lynn Lucas Middle Schools.  Mrs. Soose served as the Technology Innovation Coach and Library Manager for Lynn Lucas Middle School for the 2017 – 2018 and 2018 – 2019 school years.  She is excited to serve in that same role for Parmley for this school year.

Mrs.  Soose married her husband, Jordan, in June of 2011.  They have two children, Jenna, born in June 2012, and Jensen, born in October 2016.  Jenna is a second grader at Parmley Elementary.  They also have two dogs, Millie and Maui.

In her free time, Mrs. Soose loves reading, spending time with her family and friends, and going to the beach.  Her favorite authors are Nicholas Sparks and Janette Oke.